There was a buzz of excitement as I lugged my bike on to the train in Nottingham on Saturday morning, although I had to go through the usual process of checking and asking if I was on the train about ten times there was an unusual sense of order and organisation, something that feels wholly unfamiliar to me. The plan was to meet my good friend Nes in his home town of Sheffield and ride directly out to the Peaks for an overnight bivi before riding back the next day. Once again the aim was to embrace the spirit of a ‘micro adventure’ championed by Alastair Humphries, doing what you can within your means and challenging the boundaries of what you would expect to experience in 24 hours.

Feeling in need of a treat I had ordered a new handmade saddle bag from bikepack.eu in Poland, these are made with bikepacking specifically in mind and provide substantial and sturdy storage for camping gear and any other bike bits and bobs that might be required. It was indeed, the perfect tool for the job………shame it hadn’t arrived yet. Undeterred, I fashioned my own saddle bag out of a dry bag and some para cord. It worked a treat and I used it to stuff a load of extra warm clothing in.

We left Sheffield a little later than planned, as this involved a stop off at the wonderful Greedy Greek Deli at Hunters Bar where the beautiful friendly staff provided all manner of great food, the owner raised an eyebrow at our plans to camp and looked at our overladen vehicles with some bemusement.

Endcliffe Wood provided a virtually road free route to the edges of the Peak District, and as we rolled our humous filled bellies along singletrack through the golden autumnal woodlands I had the usual “hmmm I should think about moving here” thoughts. At Ringinglow we left the tarmac to join Houndkirk Road, a popular sandy rocky track that snakes over Burbage and Houndkirk Moor. 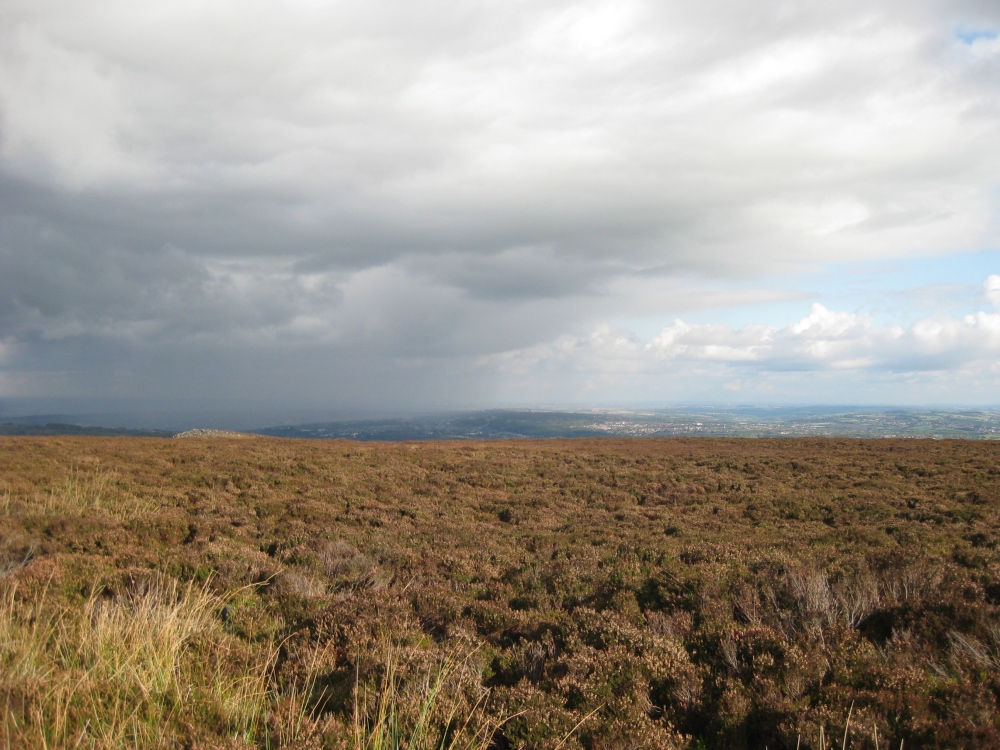 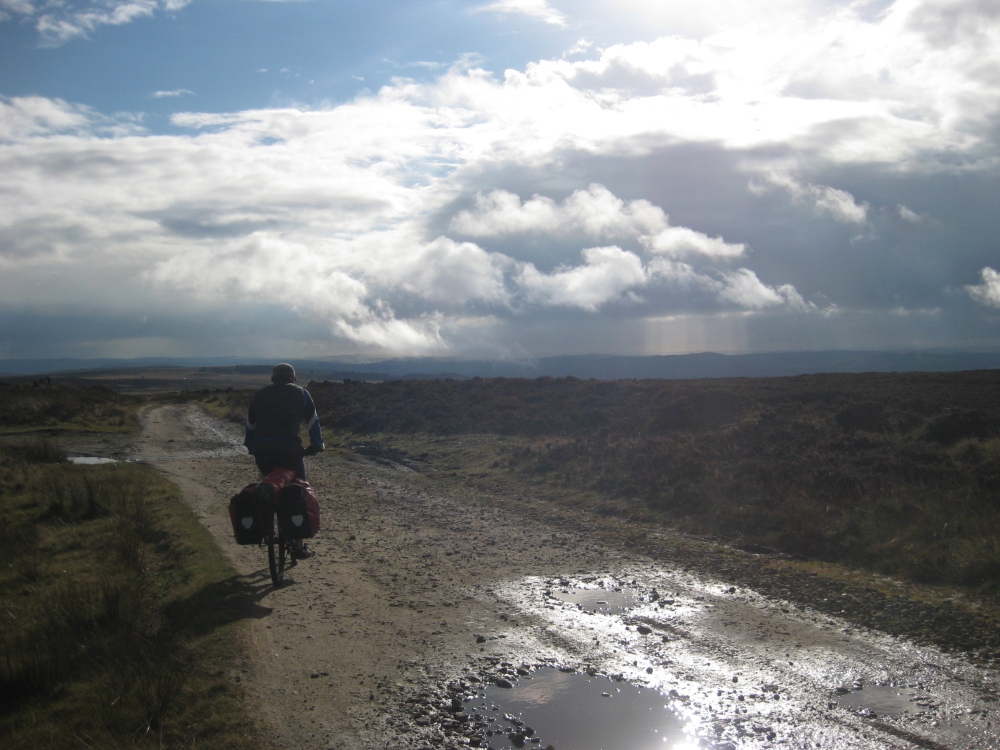 We had only left the city half an hour ago but it felt like we were well and truly within the peaks. Sheffield was still clearly seen a mile or so away but was now covered in black cloud fulfilling the nationwide forecast of showers. The descent to Fox House was great, regrettably my mountain bike seldom gets used for what it was built for but today, bouncing over rocks at speed put a huge smile on my face.

Rain began to fall as we approached Nether Padley and Grindleford, the long descent down the B6251 soaking our faces. At the base of the hill we had a chance encounter with one of Nes’ Sheffield friends who treated us to some flapjacks, I felt the reasons to move to this part of the world become even more weighty.

We passed the Edges of Froggat and Curbar, both flanked with the rich colours of autumnal woodland before again leaving the road at Stoney Middleton to take a track through the narrow Coombs Dale. In spite of some confusing signage this fortuitous route turned out to be worthwhile, climbing up a track between steep hillsides through woodland up to the higher ground of Middleton Moor. Once again the sun shone down, the only disconcerting issue was the warning of quicksand, eep!! 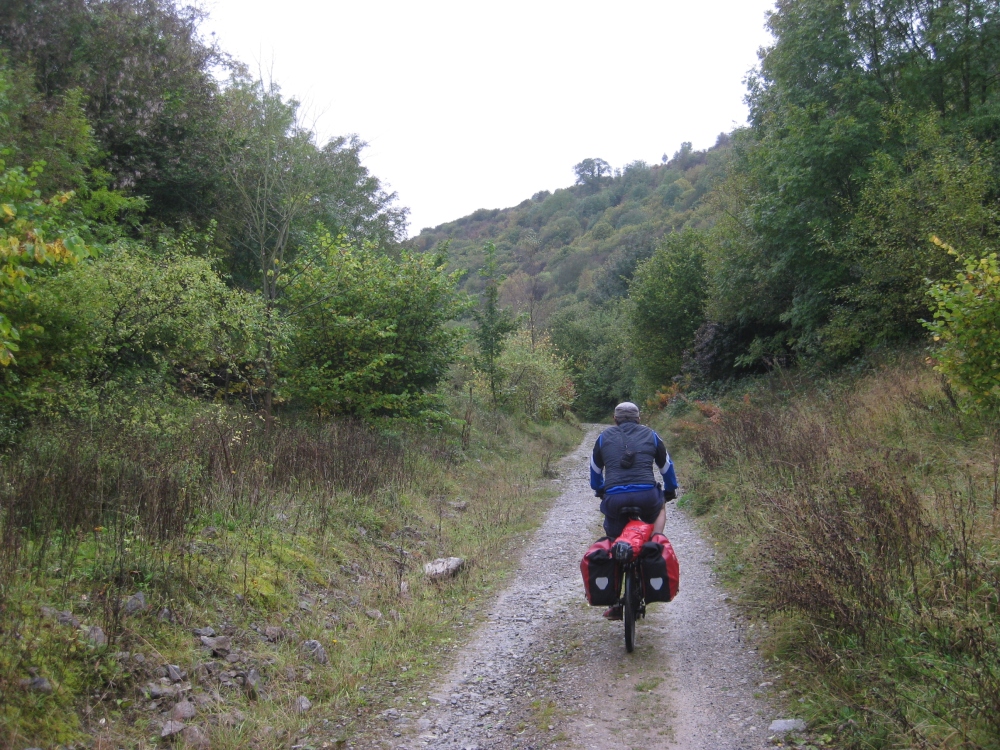 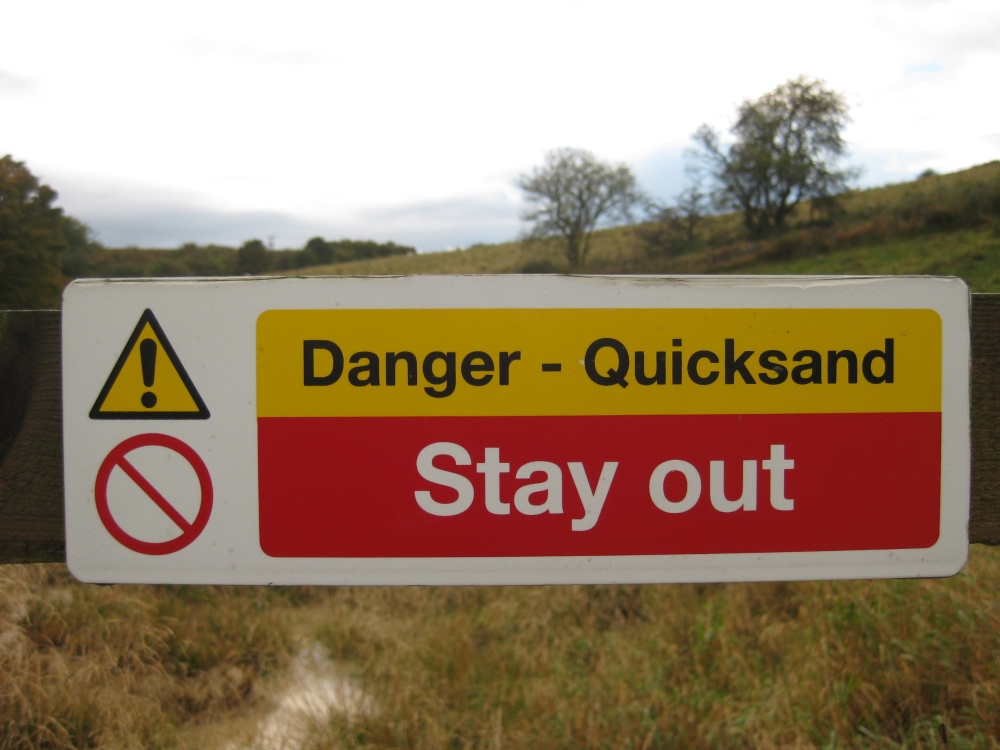 A descent to Cresswell led us to the stunning viewpoint of Monsal Head, the conditions provided sun soaked views down into Monsal Dale. It was now after 5pm and my aspiration to ride to Goyts Moss and the Roaches to camp before sunset were fading as fast the light. Some deliberated chin stroking resulted in a trip to a pub in Millers Dale where we considered our options for a location to sleep out. 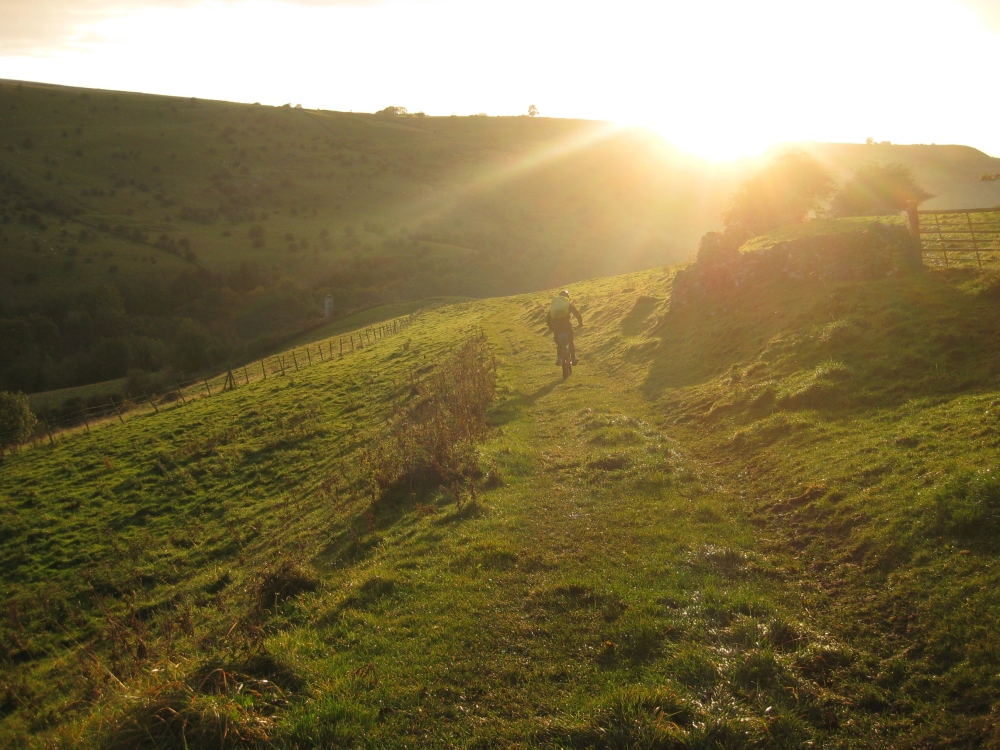 With a location in mind, we backtracked to Litton Mill where a footbridge crossed the icy looking River Wye, we then slipped and clambered up the hillside beyond the woods to try our chances. Night had now fallen so we were willing to settle for anything remotely flat as we stumbled about in the dark felling cold and hungry. We needn’t have worried, Nes spied an idyllic grassy space amongst a thicket of Rosehip and Hawthorn bushes, even on a steep open mossy hillside you can find a comfortable space. The spot was hidden from all sides, whilst it wasn’t the wildest place to sleep out in, it was definitely one of the most inconspicuous.

We stashed our bikes firm in the belief that nobody else would be in the vicinity and headed back down to the pub. The valley was now sealed with a blanket of thick mist and we walked for twenty minutes along a pitch black lane, the headtorches only made the mist look brighter.

At the Anglers Rest I had my first pie of the weekend (steak and ale!) and enjoyed the novelty of having a home cooked meal before camping out. Several hours later we were a few quid lighter and the world had been put to rights, we headed back along the dark track and up the hillside. The clear skies made for a cold and starry night, the grass had already started to harden with frost and made a satisfying crunch underfoot. Within minutes I was wrapped up warm and gazing up from my bivi bag, three shooting stars blinked across the sky in quick succession. 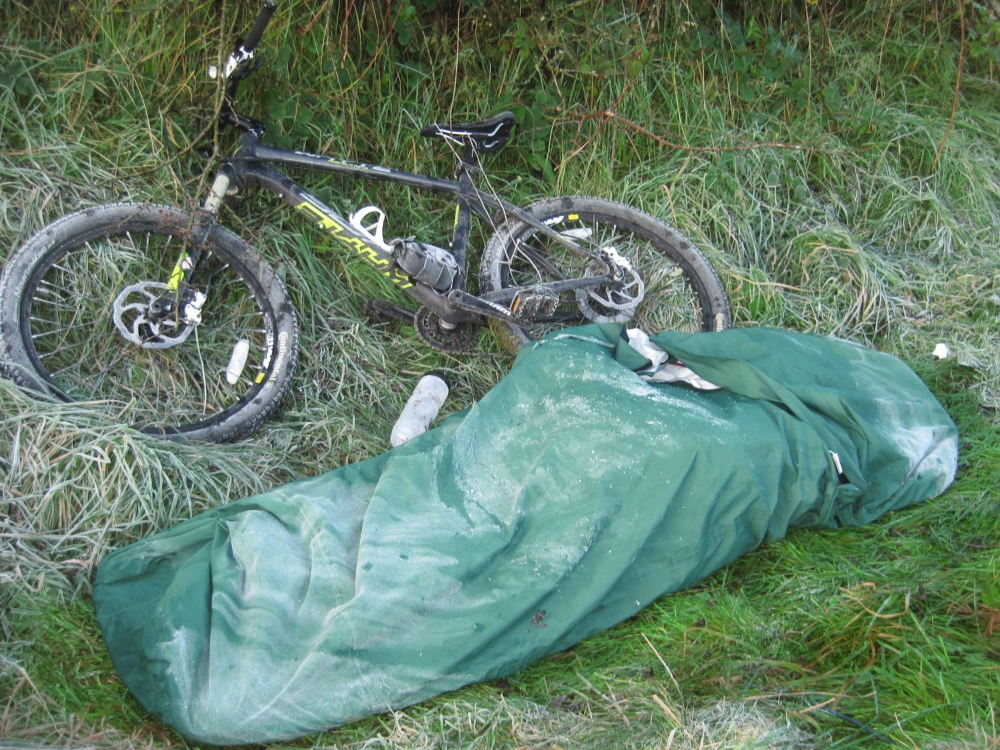 I opened my eyes at dawn to a darkness which had a light blue tinge to the east, the hawthorn branch above me was faintly cast against the night sky. A pan of water was ready to be boiled and a prepared mug with a teabag, milk powder and sugar sat alongside it. The ground was covered with a hard frost, as was everything else that had been exposed to the chill of the night, the frosty coating that had covered my bivi actually snapped as I sat up. With a freshly made brew I sat warm in my bag and watched the morning come to life, the sky had remained clear and misty patches remained lower down in the valley, the sun was leaking into the valley from the direction of Monsal Head but offered little in the way of warmth. 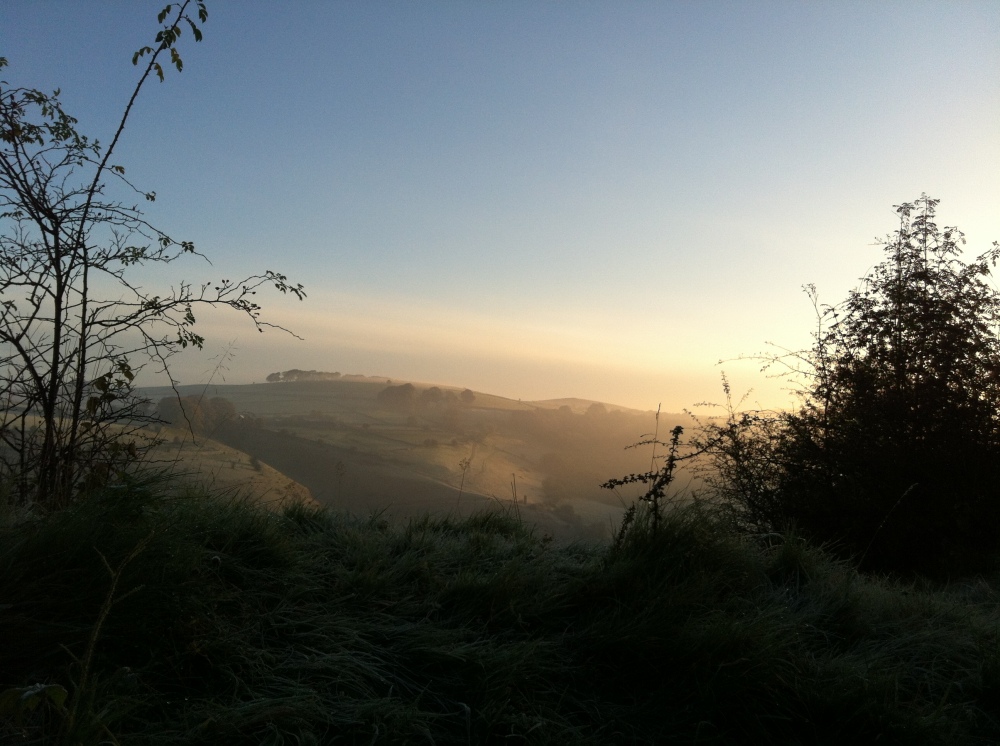 We shared my down jacket to keep the morning chill at bay whilst ruminating over a route back. After a minimalist breakfast of ‘nakd’ bars (cashew and date!) we were packed up and hit the road, I predictably got a puncture and despaired at the faint hiss coming from the valve on my rear tube. I am a flat tyre magnet. 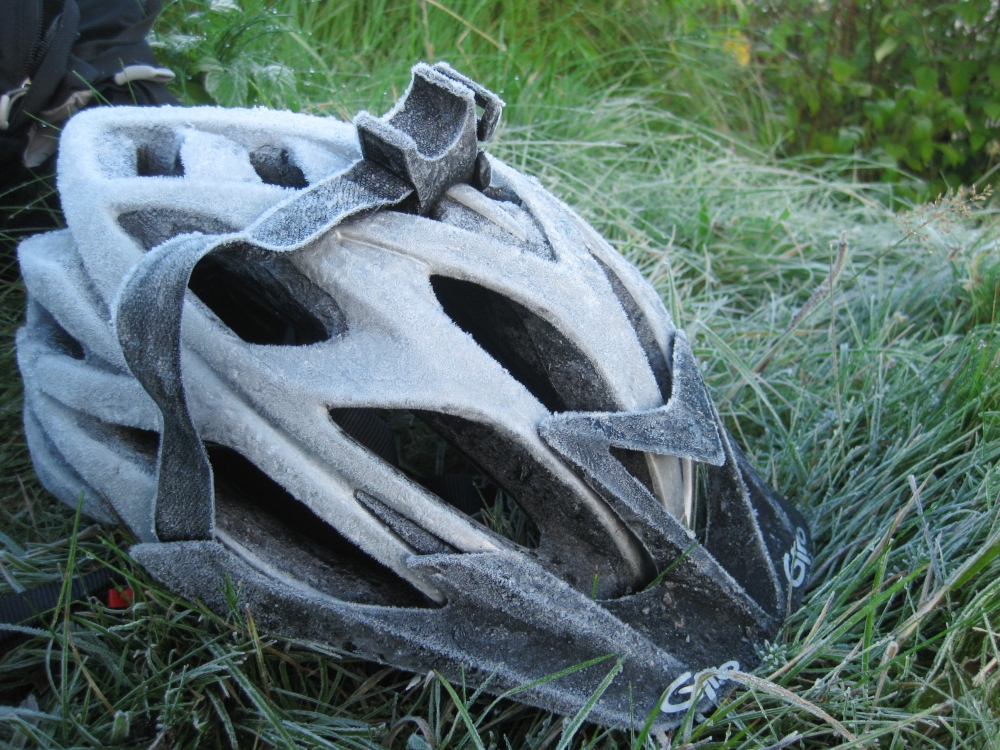 The Monsal Trail took us through the valley and some old railway tunnels, the fair conditions had attracted the crowds out in numbers and the trail was busy with walkers, cyclists and even an abseiling group at Chee Dale.We took the Pennine Bridleway away from the trail, I just about managed to ride up the steep bank, as Nes had opted for panniers and a bike with none too grippy tyres he didn’t have much choice but to push. The combination of sunshine and uphill riding made for hot work, the numb fingers and frost of the morning seemed like a distant memory.

The morning was spent riding the quiet back roads of the Peak District, climbing and descending the grassy single lane channels that probably see no more than twenty cars a day. There were plenty of cyclists out, though I do wonder why some road cyclists only acknowledge other road cyclists and completely ignore you if you’re on a mountain bike, down with that type of thing. The fair weather allowed for views of Shining Tor and the Goyt Valley to the south and before long the dark peak giants of Kinder Scout, Bleaklow and Mam Tor came into sight. 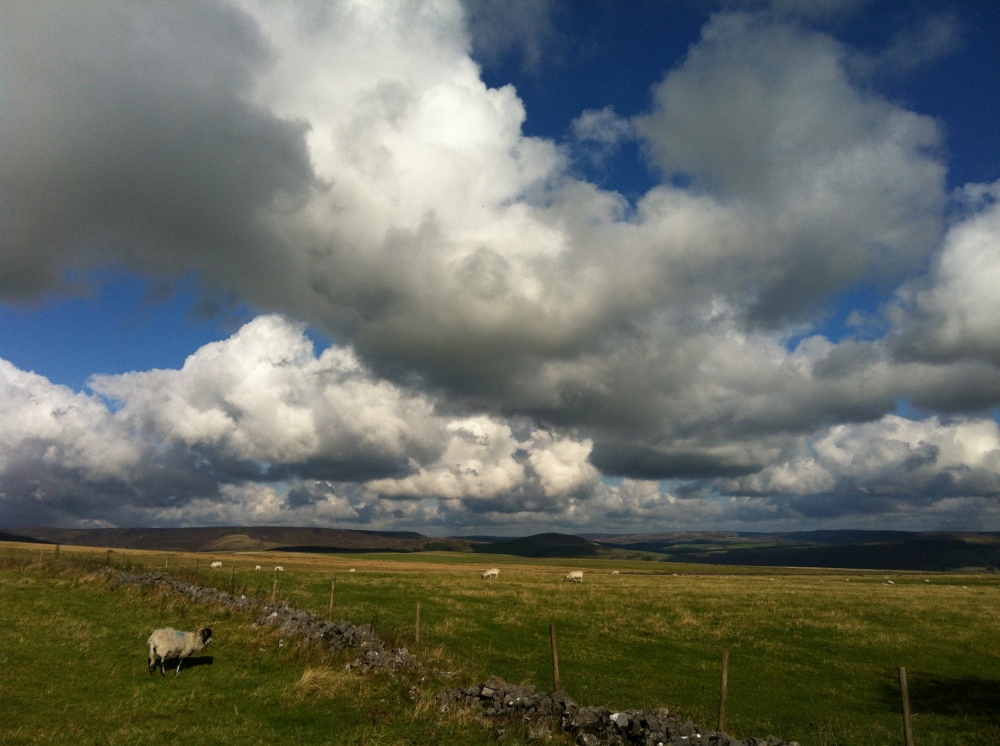 Bellies were rumbling by the time we got to Castleton as we hadn’t really done breakfast except for a few energy bars. We thought about heading to the chippy but sensibly agreed that fish and chips would be far too heavy to ride back to Sheffield on. Instead we headed to The George where I had a massive Rabbit Pie, Chips, Veg and Beer, I’m sure you’ll agree, a far lighter option. It was great.

We left the Hope Valley and headed for Stanage via Aston, Yorkshire Bridge and the endlessly steep New Road that ascends the southern edge of Bamford Moor. Hard going for Rabbit Pie eaters, but occasional rest stops allowed us to pause and look back down on the sun soaked Hope Valley. 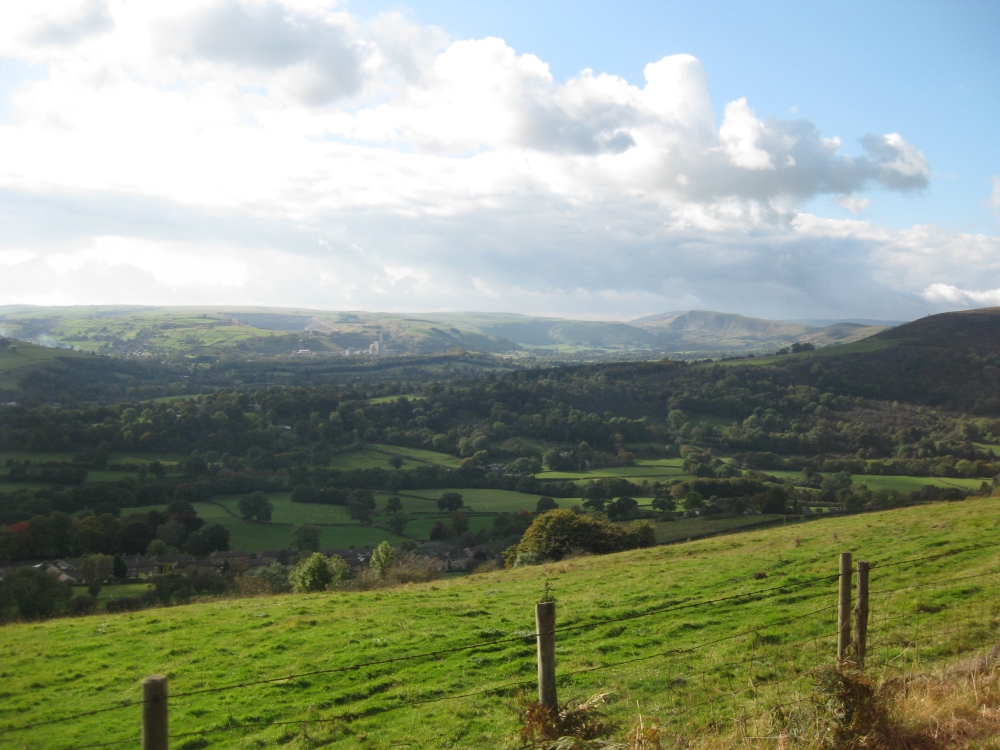 As we approached Stanage Edge I had a good opportunity to attempt a climb of the tricky uphill bouldered path, much of the track was rideable and it was only near the top where getting off to push was necessary. A flat sandy track with the occasional boggy puddle lead to Stanage Pole overlooking Fairthorn Lodge and from thereon it was forks unlocked and downhill bouncing all the way to Redmires Reservoir.

We ended the ride as we had started, this time riding downhill through idyllic woodlands following the River Rivelin back to the city centre. On an even more positive note I missed my train by 5 minutes which gave us a great excuse to head to the great pub next to Sheffield station. I don’t think I’ve ever eaten or drank so plentifully when I’ve been on foot, bikepacking certainly has its advantages. Earlier in the ride we both mused over the intrinsic pleasure of travelling under ones own steam and having everything you need for both survival and comfort upon your person. Not amounting to any significant weight I had in my pack a bivi, a winter sleeping bag, a down airbed, a down jacket, waterproof jacket, waterproof trousers, spare socks, a fleece, two torches, a pan, a stove, gas, flask, tea, coffee, hat, gloves, milk, some basic food, maps, a cuddly toy, camera and phone, and everything else was being worn or stashed about the bike. In some ways it felt a shame to head back as we had all the necessary gear to continue riding and camping out for a few more days.

The train journey back to Nottingham was a bit of a mare, I’d assumed the Sunday evening train would be deathly quiet but it was in fact packed full of grumpy shoppers, none of whom looked particularly happy to be squeezed up against a beardy man who spent the night in a bag and his very muddy bike.

6 thoughts on “A Pietastic BikePack round the Peak District”